Now here's the problem. The Spider was first established at New England Reptile Distributors (NERD) in 1999, and we still have yet to see a proven Super Spider. The super spider debate has been on going for quite a while. Do we as a hobby have terrible odds, is something strange going on at the locus that prevents super spider from being possible, or is it a lethal genotype? Lets lay out all sides of this debate.

Some will say, there hasn't been enough Spider x Spider breedings to prove or disprove a Super Spider. If it is a dominant gene, you first have a breed a Spider x Spider. Every Spider offspring only has a 33% chance to be Super, then you have to raise up the offspring and do multiple breedings to prove it is in fact Super, rather than just getting lucky on a clutch as you do with a co-dom/inc-dom morph. While always a possibility, we are really saying the hobby has had terrible odds as a whole to have the super spider elude us, given the amount of offspring that have been made from this pairing over these years. The only thing can really prove this is the case, is a proven Super Spider.

When this side of the debate is brought up, it almost always refers to this video Kevin McCurley of NERD was in. I saw him at a Tinley show and asked for clarification, Kevin said that there is no Spider that is guaranteed to throw all Spider offspring, but breeding Spider x Spider doesn't result in lethal offspring. From what I understand he is saying the Super Spider just simply does not exist for an unknown reason and is not a simple dominant gene. Which can really only be explained by something strange going on at the locus where the gene resides. There are others who claim to have trials of Spider x Spider breedings and agree with Kevin. My personal problem with this is there doesn't seem to be any documentation of any of this in public. We are going off what people have said only. It is hard to prove or disprove as there is no known mechanics or even data to discuss.

The last side of the debate is the the Super Spider is lethal, which is a possible reason for the fact we haven't seen one yet. However there are also reports of increased number of slugs, lower than expected egg counts, and a high ratio of eggs dying during the incubation process in Spider x Spider breedings. I personally have experienced the high slug count and eggs dying early in incubation. Now obviously this can be counter argued as these events can happen during any breeding, but for many of us it seems to always happen with Spider x Spider breedings.

We can also take something from the patterns of other wobble inflicted morphs. As a very general rule, breeding wobble morphs (Spider, Woma, Hidden Gene Woma, Champagne, Sable, Spotnose) together leads to problems of more severe wobbles, animals that are difficult to hatch at all, or just flat out die after hatching. What reason do we have to believe the Super Spider wouldn't follow the same pattern it is already involved in as the most afflicted wobble morph? It is also highly suspected that Spider is allelic to Woma, Hidden Gene Woma, and Champagne based off the pearl type animals we have seen from these combos.

There was also an near all white snake posted on Bush-League Breeders Club (the forum is no longer online) from a Spider x Spider pairing. Notice there is some color, this is a close to full term snake, not just an hatchling that passed early like many of us have experienced. That could of been the Super Spider. However, this is the first time someone publicly has shown anything like this from a Spider x Spider breeding. The theory is the Super Spiders don't normally go full term and this one nearly did. There is also up to 7 other accounts of this being reported.

This is where the debate has stalemated for many years, without really much new evidence to input besides more results from the few Spider x Spider pairing that get reported. Which from what I have seen have actually leaned toward the lethal side of the debate. Then evidence came from an unlikely source, the Black Head gene.

I'm sure most of us by now have seen some of the cool combos the Black Head can create. It is a simple inc-dom morph with a super form like many of the other plethora of morphs the ball python hobby has to offer, but it has one quirk that may not be widely known. It is allelic with Spider. The Black Head Spider combo itself isn't much of a looker, it seems to actually dial back the spider influence. It isn't what anyone expected, but breed a Spider Black Head to a Normal and all you can make is Spiders and Black Heads. Another interesting thing is the combo has also been reported to mask the wobble, as Spider Black Heads show no wobble, while their Spider counter parts still do. While there is a lot that could be discussed with this gene, I want to talk about how it pretty much shatters the Super Spider debate.

One side of the debate argues something unknown happens to prevent the Super Spider from existing that is not described as lethal. Until now you really couldn't write this off as we have other unexplained genetic abnormalities in the hobby. Now that we know Black Head and Spider are allelic and Black Head has proven Super, this proves without a doubt the Spider locus has two spots for the gene to reside on without issue. There is nothing strange going on, everything works as expected. We can't make excuses for its non-existance anymore, the Super Spider has to exist. Now it isn't unreasonable to see why it is hard to see this, given the wide range of problems that seem to be associated with Super Spider lethality. They don't just hatch and die after, like the pearl animals. They seem to have a range of lethality from slugs to near full term. However it is not a viable combo either way.

So being able to throw out that side of the debate in a single bound, what are we left with. Bad odds or Lethal. Well at this point I think it would be silly to expect the Super Spider to be eluding us all these years through bad odds. While the debate could be reopened by actually discovering a Super Spider, but simply following the evidence the debate overwhelming points toward one conclusion.

The Super Spider is a lethal genotype. Debate over.

After writing the above article, I still had an 8 egg Spinner Hypo x Spider clutch in the incubator. I already planned for this to be my last Spider x Spider clutch as information with the Black Head gene pretty much put ended the debate. However I had an interesting development I might as well share. I had 2 eggs go bad prematurely, cutting them open showed under developed white snakes, however that isn't unique to Spider x Spider pairings. The big surprise came when some of the remaining 6 eggs start pipping. We cut the eggs and found yet another white snake, but it was still alive in the egg. I took video to show it still breathing, however it was very slow and was pretty obvious this was not a healthy animal. This is an actual full term Super Spider without a doubt. There was a little coloration on the head and neck. I looked at the animal under a black light, no pattern showed up. I also had the animal taken in for a necropsy. Spine was deformed, organs all looked healthy. I opted out of paying for further testing. So there we even have video and addition pictures of the Super Spider. There is nothing left to discuss, we have overwhelming evidence that the Super Spider is a lethal genotype. 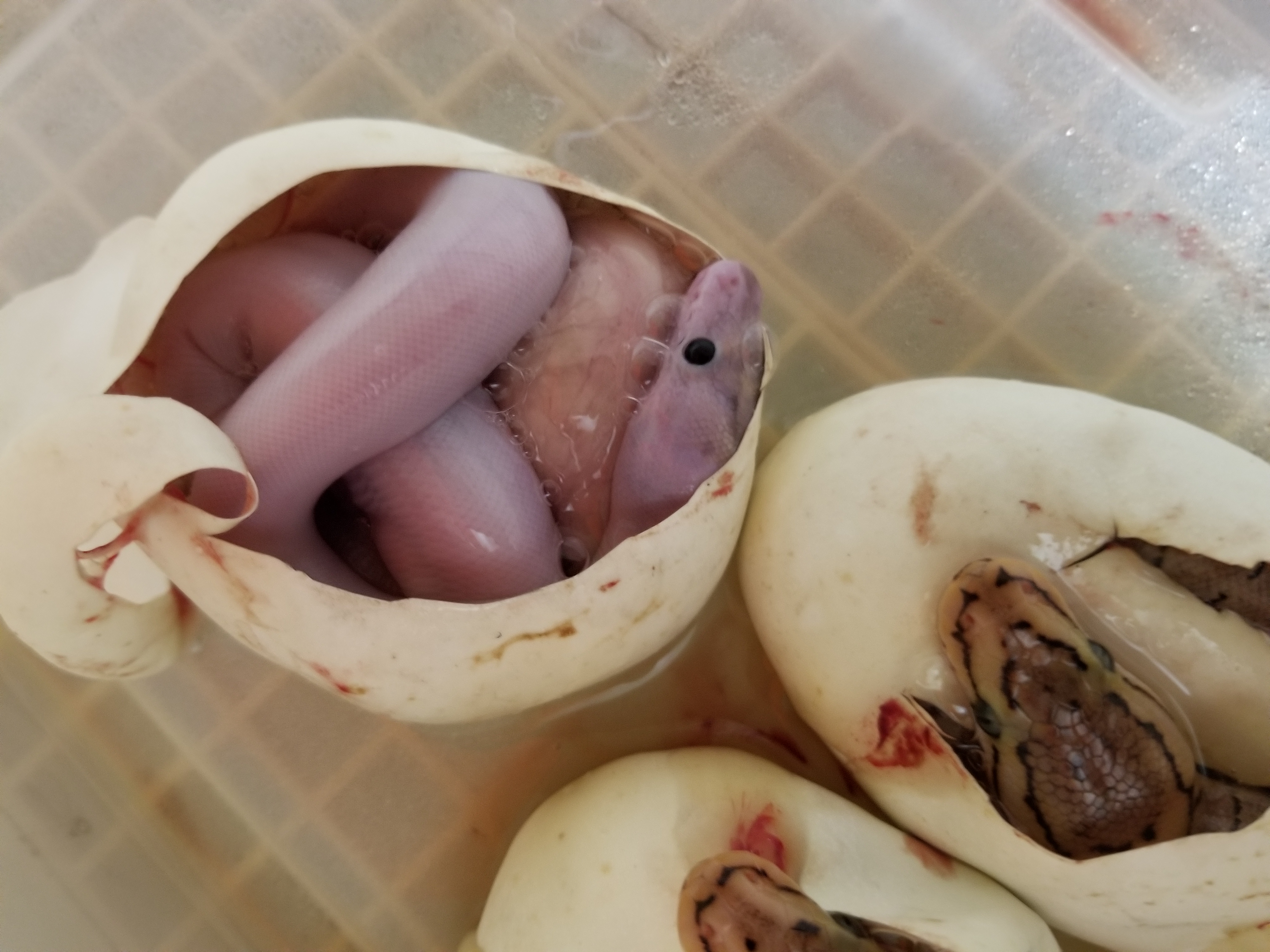